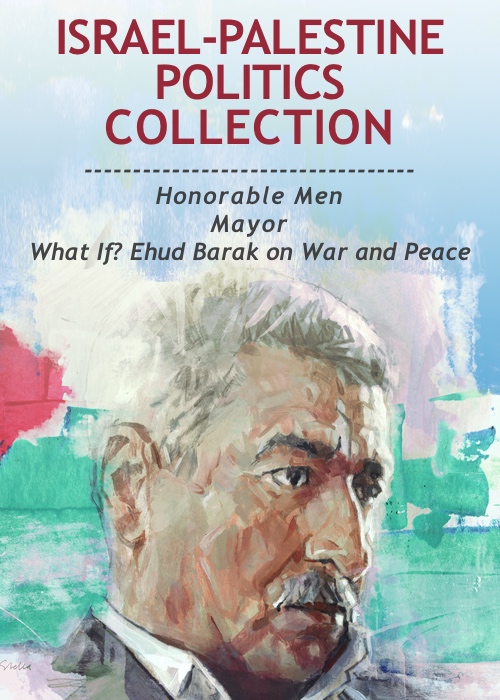 Covering controversial and complex figures of the region, these three recent documentaries go in-depth to examine political leaders in both Israel and Palestine over the last 20 years. While all very different in their approach and politics, the films included in Film Movement’s Israel-Palestine Politics Collection each ponder the question, what does it take to govern in one of the most contentious regions in the world?

HONORABLE MEN (2020, directed by Roni Aboulafia)
Honorable Men tells the story of former Israeli Prime Minister Ehud Olmert’s unexpected rise to power and his dramatic fall from grace, from the highest office in the land to Ward 10 at Maasiyahu Prison. Set as a political thriller, it follows the incredible events that elevated him to power and sets the stage for his epic fall, creating a portrait of a multifaceted man and providing a behind-the-scenes look at the mechanisms and machinations that control politics, justice, war and peace.

MAYOR (2020, directed by David Osit)
The real-life political saga following Musa Hadid, the Christian mayor of Ramallah, during his second term in office. His immediate goals: repave the sidewalks, attract more tourism, and plan the city's Christmas celebrations. His ultimate mission: to end the occupation of Palestine. Rich with detailed observation and a surprising amount of humor, MAYOR offers a portrait of dignity amidst the madness and absurdity of endless occupation while posing a question: how do you run a city when you don't have a country?

WHAT IF? EHUD BARAK ON WAR AND PEACE (2020, directed by Ran Tal)
In this remarkable film, Barak observes with disillusioned clarity his own history and the history of the State of Israel. Twenty years after the failure of the 2000 Camp David summit, Barak looks back on his life and analyzes the Israeli reality with a critical eye.